The second day at the Mwanza farm began at the crack of dawn – 6am. I would say it started with the birds, but I’m sure they had been up for hours already . . . the rooster had at least.

First thing, John took me to see some his crops surrounding the house. His fields passed the immediate farmland that I initially mistook for a garden, and extended several hundred meters around the house. Still puny when I think about the farm fields back in Saskatchewan. John dug up sweet potatoes for breakfast. 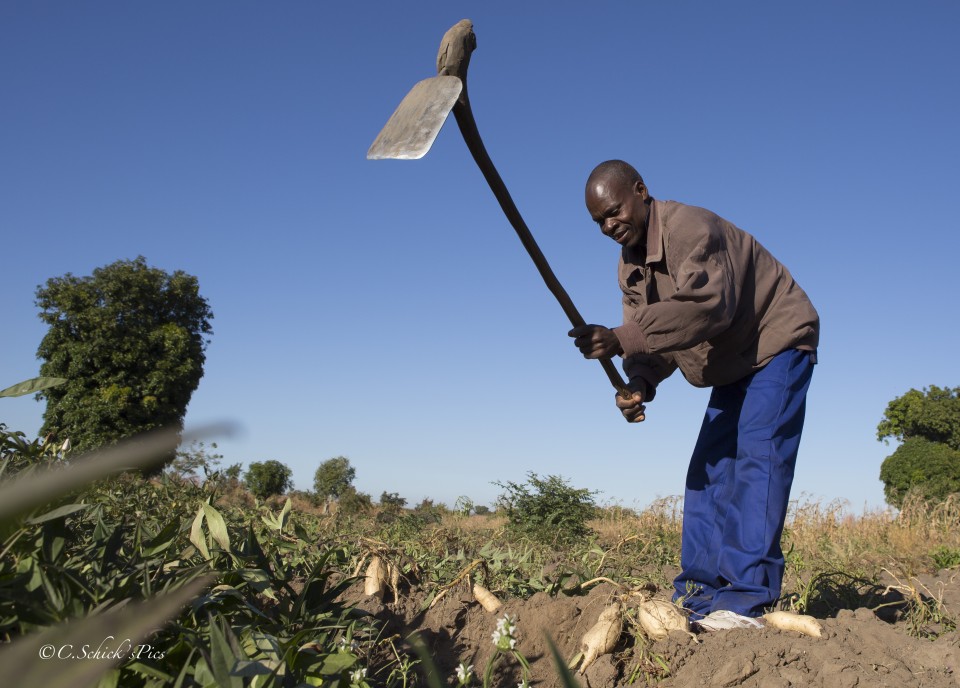 Photo by Crystal Schick
John Mwanza digs for sweet potatoes to feed his family for breakfast at his farm about 20 km outside Petauke, Zambia, on June 3, 2016.

Bernadette cut the potatoes in quarters and then simply boiled them in salt water over the open fire. We broke them and ate them with our hands. I had thought potatoes and tea to be a strange breakfast choice, but I hadn’t expected such delicious sweetness to come from a potato! I actually had to ask if they added sugar. They had not. These were just truly sweet potatoes. Fresh and organic.

After lunch John and I set out to his cabbage patch, which was about a 4 km walk. There he also has a nursery and a proper greenhouse even. It was a nice walk, but it was only 9 am and I was already feeling the heat from the hot, hot, sun. He took me to see a dam that was built in the mid 20th century. Adjacent to the dam was his garden. His cabbage patch was about 50 by 20 metres in size, and the cabbages were larger than any cabbage I’d ever seen in a western grocery store. 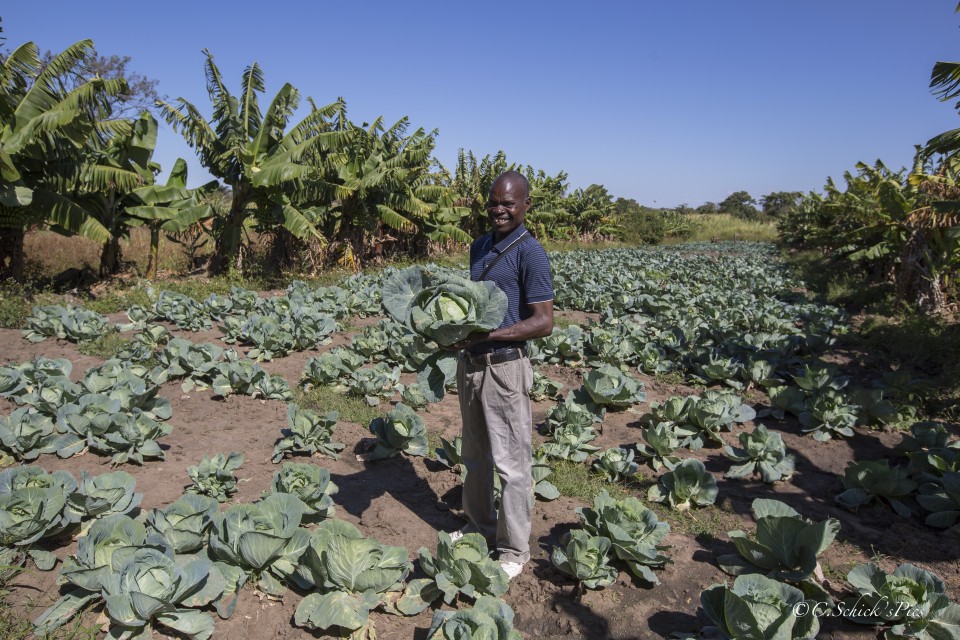 Crystal Schick
CALGARY, AB — John Mwanza stands in his cabbage patch holding a typical cabbage yield at one of his several vegetable fields about 20 km outside Petauke, Zambia, on June 3, 2016. —

Upon our arrival there were customers from a local village (this cabbage patch isn’t exactly convenient for anyone to get to), there to purchase. John walked his patch and picked out the biggest and best cabbages he had for each of the four women, chopping off its large root with a machete. I overheard John talking price. He sells his cabbages for around 3 to 5 Kwacha. These huge, beautiful, organic, cabbages, for approximately 3 to 5 Canadian cents. I told him that his cabbages in the western world would fetch minimum 30 but upwards of 100 Kwacha, or 3 to 10 dollars Canadian. It’s unfathomable to him.

While at the cabbage patch, where John also had a couple other crops, such as banana trees, he made a suggestion. He suggested we take back a piece of a banana tree to replant back at his homestead, in honour of my visit. He said he would take care of it and send me photos as it grows. I of course agreed to this remarkable suggestion, especially since bananas are my favourite fruit! Now they will have a permanent reminder of my visit everyday they walk out of their home and see the only banana tree on their property. I told John I’d have to come back and visit one day in the future now for sure, to test out the quality of the banana…. 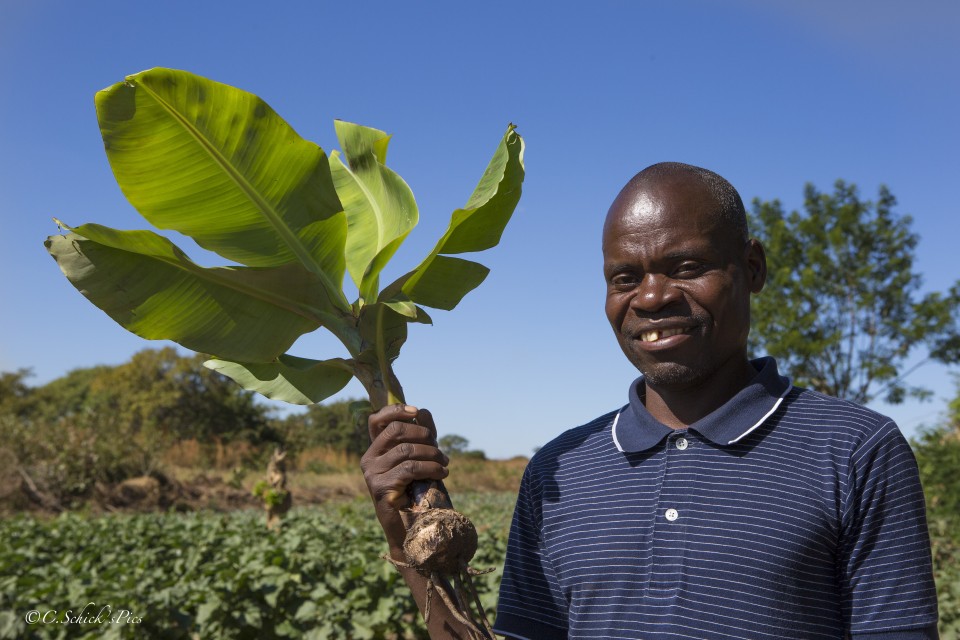 Photo by Crystal Schick
CALGARY, AB — John Mwanza holds the part of the banana tree to be planted on his farm located about 20 km outside Petauke, Zambia, on June 3, 2016. —

One thing that surprised and impressed me, was John’s knowledge about agriculture. He seemed to know everything there was to know, and progressive information too, about tractors and such. His vocabulary regarding the topic certainly surpassed mine too. Not only that, his knowledge about his surroundings was unfounded. He knew what every tree or plant was called, what all the insects and animals were, and how to navigate through dirt paths that seem like a twisted maze with no end.

As we began our long, hot, trek back, we walked through a village, which was compiled of just huts. Most of the homes I had seen were of broken brick or concrete and tin or thatched roofs, but these home were truly original and basic. At this village I got to see how the grass mats were sewn together, met the chief, watched children push wheels and a metal bike rim around, and most importantly, found our bike rides back to the Mwanza homestead. We were doubled on the back bike racks by two strong young men, who were riding bikes from America circa 1960, on the roughest, most uneven dirt and sand paths. 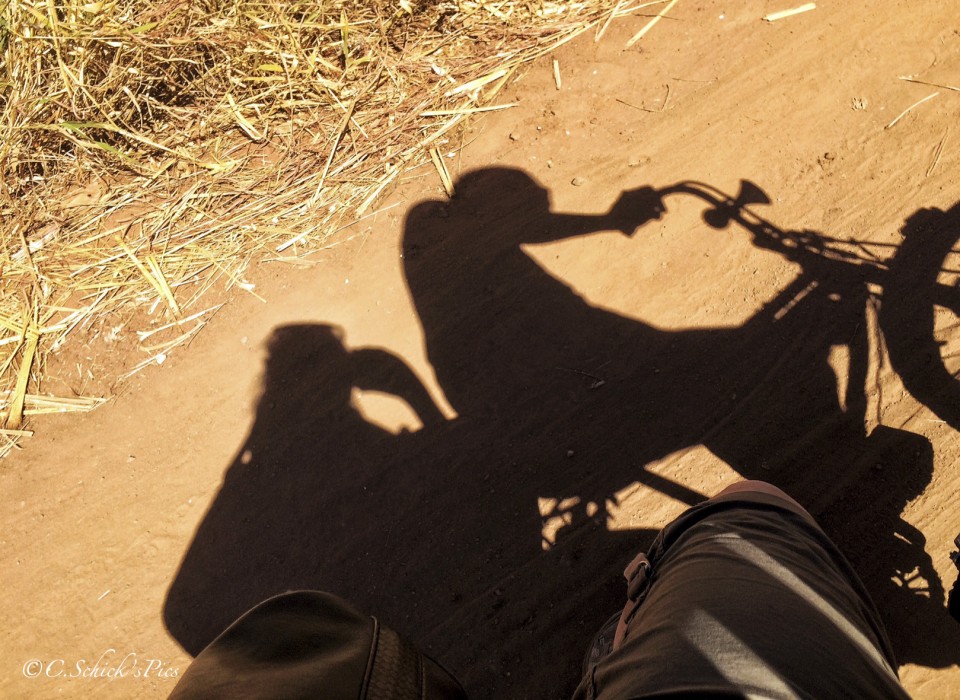 Photo by Crystal Schick
Catching a bike ride back to the Mwanza’s homestead means riding on the back rack of a bicycle with camera gear on the roughest dirt roads imaginable. Photo taken about 20 km outside Petauke, Zambia on June 3, 2016.

Once back at the homestead, Bernadette served us lunch. Local fish they had delivered just for me since they knew I would eat only fish for meat. Such a kind gesture, such a gross, fishy, fish. They also make a really delicious fried cabbage slaw and added an eggplant dish to the meal. After lunch, I played some Frisbee with the kids. I had brought a Frisbee from Canada for them. It was new and exciting for them and a good way to interact with the children who didn’t speak English.

They offered me to bath, but I declined. While the water is semi-clean (from a bore whole), and warm since they warm a metal tub over the open fire, I just couldn’t get into the idea that I would be pouring little cups of water over me, in an outdoor hut with no roof. It was a little area, about 20 yards removed from the house, and enclosed by thatched weeds/grass. It was about eight feet in diameter. The outhouse was the same, but on the opposite side of the house, and taller and only about 4 feet in diameter. And it was literally a hole in the ground. All definitely knew experiences for me. 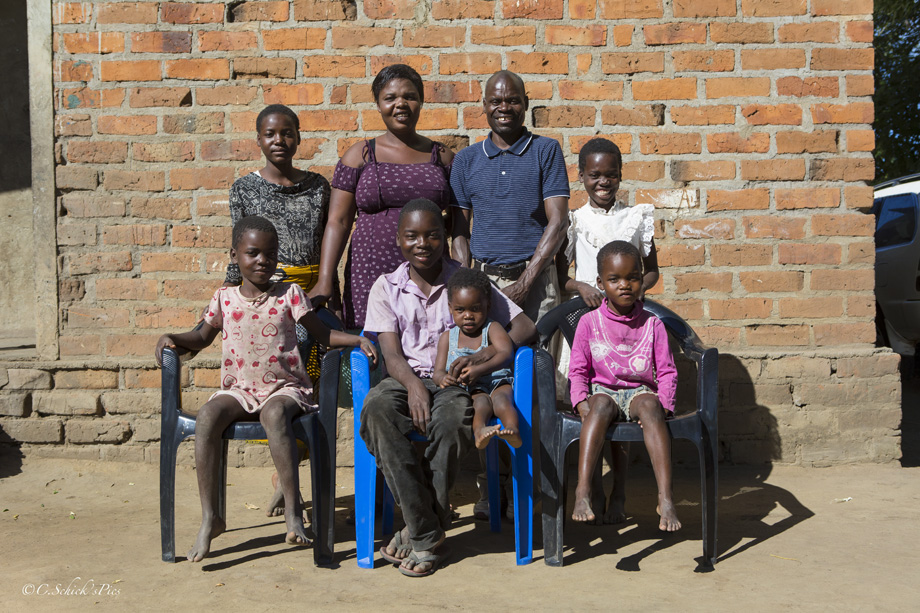 Photo by Crystal Schick/
CALGARY, AB — John Mwanza, his wife Bernadette, and six of their seven children at their home and farm about 20 km outside Petauke, Zambia, on June 3, 2016. —

But regardless of my personal discomforts, which truly were few, the entire time I was at the Mwanza farm, I felt welcome and comfortable. John Mwanza was a very friendly, proud, and surprisingly articulate and intelligent man and I wish him a very successful and prosperous future. I would definitely go back to visit the family. Well, I have to now, to check on my bananas!