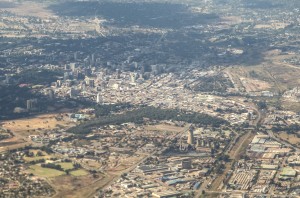 Photo by Crystal Schick
A view of Harare, Zimbabwe from the airplane after the last stop on the way to Lusaka, Zambia, on May 29, 2016. —

The flights were long, but luckily I met some really great people. A business man was my row companion on the long leg. He lived in Zambia for six years but was heading on to Mali where he lives now. He gave me some phone numbers of some people he knows here to help with exchanging money or rides places. Another couple who was on the same flights as me all the way from Toronto to Lusaka became my lay over buddies. They are here to do work with an NGO (non-governmental organization) that they run. Will likely be meeting up with them on Tuesday.

I am on free exploring time from today until Tuesday. Wednesday I will begin work with the NGO Rent to Own. Thursday we will head out to the Zambian countryside for work. 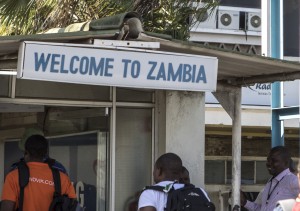 Photo by Crystal Schick
Welcome to Zambia sign looks good after travel for about 20 hours from Toronto, Canada, to Lusaka, Zambia, on May 29, 2016. —

First impressions of Zambia, or even Africa? Almost the whole world looks the same from an airplane! Sometimes I thought that the landscape could have even been Saskatchewan in the spring. Except, it wasn’t at all. The crops seem to be circular, like crop circles, and rivers snake everywhere. Not to mention it actually has some rolling hills, coming on what Sask. folks could consider mountain terrain.

After arrival at the popular backpackers inn, I explored the surrounding area and journeyed a few blocks to a very modern mall where I was told that I could get a sim card for my phone. Most of the stores were already closed do to the late time of day, except for a grocery store, the food court and the massive cinema. The mall was so new and fancy, I could have easily been anywhere in the western world. I was awoken to the reality of my whereabouts on my red dirt road walk home, which was littered with rubbish and as I gave out most of my beloved bananas to “hungry” people.

The hostel is a nice retreat. Concrete walled in, internet, warm showers (not hot) and friendly people. Couple Zambian beers and new friends later, I am even more excited about my next several weeks in the country.