My morning started bright and early again to catch yet another bus. This day I was going to Chibombo to meet with the Rent To Own (RTO) field staff then head out to another farmers. This time, the farmer was a part time maize farmer and a full time teacher. He bought a hammer mill from RTO. He uses it for his own maize and then lets other in the community use it for a price.

When I arrived in Chibombo, I was met by Onasis, the RTO field officer, and his dirt bike. He had planned to take me about 30 minutes out to the farm. I said, “umm, no?” I totally didn’t want to risk wiping out with all my gear. So we negotiated with a taxi driver to take us out there.

When I arrived, I was greeted by Fizwell, the head of the household and my newest subject. He was not a tall man, a little bit on the round side and had a goofy smile that made me smile. 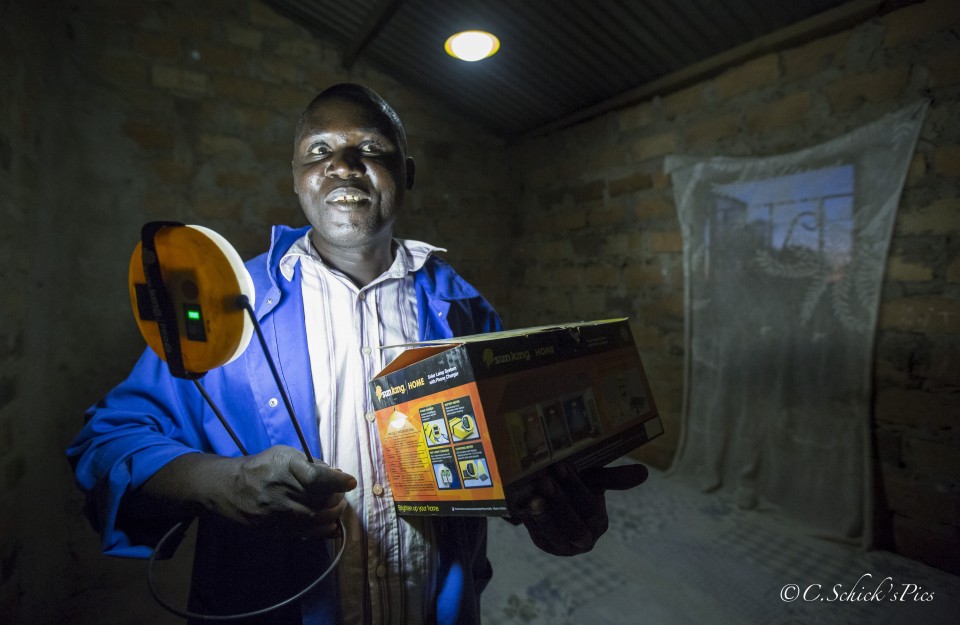 Fizwell Mudima shows a solar light kit he recieved from Rent To Own in his rural home about 30 minutes outside Chibombo in Zambia, on June 9, 2016. —
(Crystal Schick/Independent Photojournalist)

Shortly after I got there, we decided to have lunch. I told him that I was vegetarian but did eat eggs and fish. That was perfect, because his wife had made fried eggs and nshima for lunch. And! It was actually quite delicious.

Once I had significantly stuffed myself, he decided to tell me that the non-translucent cool-aid jug was containing sour milk, that was home made by taking fresh cow milk, and letting it sit in a jug for about 24 hours until it went bad. 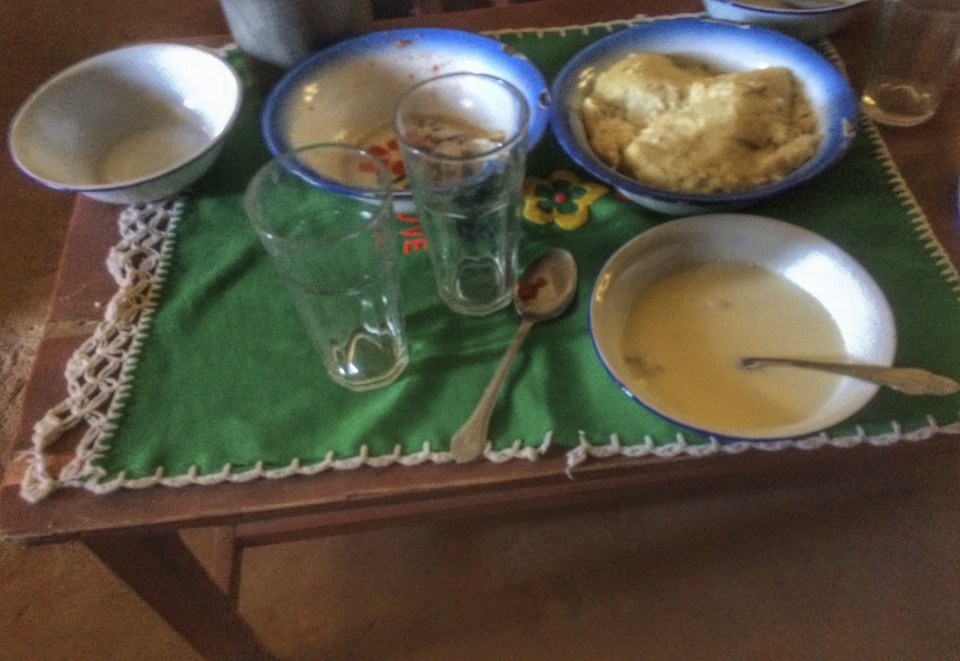 A bowl of nshima on the top right and the nshima sour milk mix in the bowl on the bottom right, in the rural home of Fizwell Mudima about 30 minutes outside Chibombo, Zambia.

We were supposed to eat it with the nshima. So I put a large chunk of nshima in a bowl, tried to break it apart a bit with my hands, then he covered it in sour milk. It looked deceivingly like porridge. I took a little scoop with my spoon and carefully tried it. It, was interesting. Not bad, just interesting. I might have eating more of it had I not been so full already. The mild was basically a runny version of sour cream.

After lunch he took me to the hammer mill. One of his co-teachers (pretty handsome too) came with us. It was a few km’s away. When we got to the building, the guy that he employs to run the mill for him daily was looking for something. The key to the lock had disappeared. So they had to break the pad lock off.

Once inside, they ran the mill for an actual waiting while I did video and stills. It was so so so dusty with maize particles. Could not be healthy for the dude who works it daily. 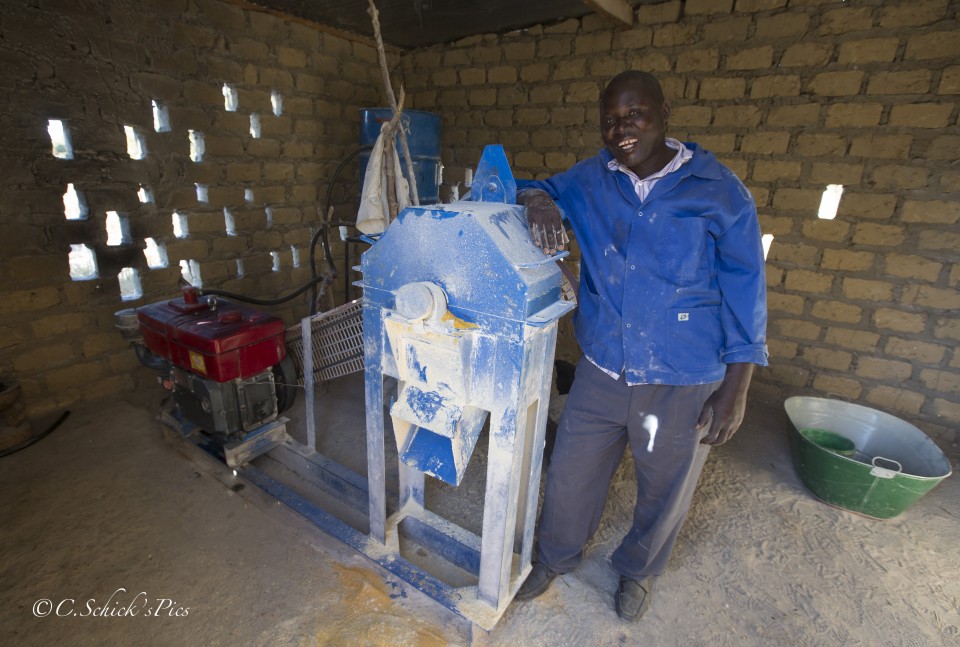 Fizwell Mudima stands next to the hammer mill he recieved from Rent To Own in his rural home about 30 minutes outside Chibombo in Zambia, on June 9, 2016. The mill is used to turn corm kernels into a flour like substance. —
(Crystal Schick/Independent Photojournalist)

Once back at the homestead, Fizwell showed me the solar lights he had gotten from RTO also. He had them strung so one was situated in each of the three bedrooms. They had three settings, low, medium and high. If all three lights were on low, they would last 24 hours off of one charge, and five if they were all on high. They light they gave off was really quite impressive once completely dark.

For supper were started with some more delicious Zambian sweet potatoes plainly boiled and eaten by just breaking apart. Could have used some salt, or even sour milk, but are so good already on their own. Then Mercy brought in some chicken and nshima. When I reminded Fizwell that I didn’t eat meat he was going to get Mercy to make more eggs, but I was actually quite stuffed on the potatoes. I ate more than my fair share.

During supper, as it was already getting dark, Fizwell had fired up his television, which was powered by a car battery and we ate in the artificial lighting. Just like at the first farmer John’s, after dinner, it was bedtime. As I walked to the outhouse for one last bathroom break, I was once again greeted by the glorious, unpolluted by city light, African sky. The moon was already low in the sky so I thought I was sleep for a few hours and get up once the moon was gone to photograph more stars.

At about 2 a.m., I forced myself out of the nice warm bed and outside into the chilly, unknown darkness. Once I was into it, it was super fun. I used my phone to light up the cooking hut, and the light coming out of my bedroom window to create some visual interest. After hearing random rustling and being startled a dozen times by the rooster, I decided to go back inside.

Up again at the crack of dawn and began to prepare myself for a morning of school! Fizwell and I walked the half a kilometer to the school and he introduced me outside to his colleagues. I got a few nice snap shots of some boys raising the Zamian flag and flag pole in front of the school. Then I got to be centre attention. 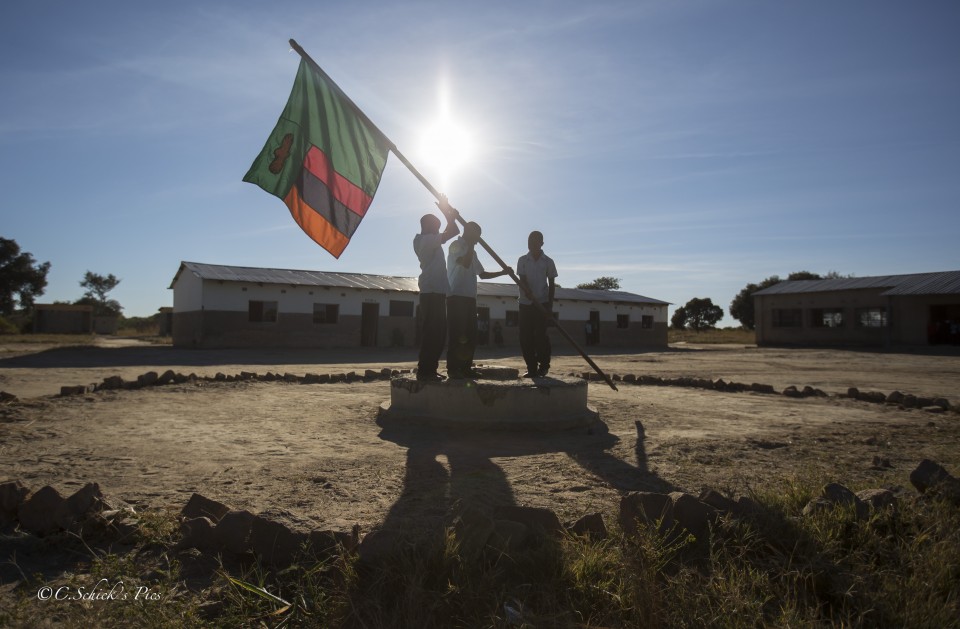 Fizwell Mudima stands next to the hammer mill he recieved from Rent To Own in his rural home about 30 minutes outside Chibombo in Zambia, on June 9, 2016. —
(Crystal Schick/Independent Photojournalist)

Fizwell took me to his classroom of first graders, where I got profusely start at, taught Lenje (local language) vowel sounds, and then quizzed in front of the class my Fizwell. I aced it! Then it was off to math with seventh graders, where I was reminded that I have clearly not used my simple math skills in far too long. Fractions to decimals!? Sheesh. 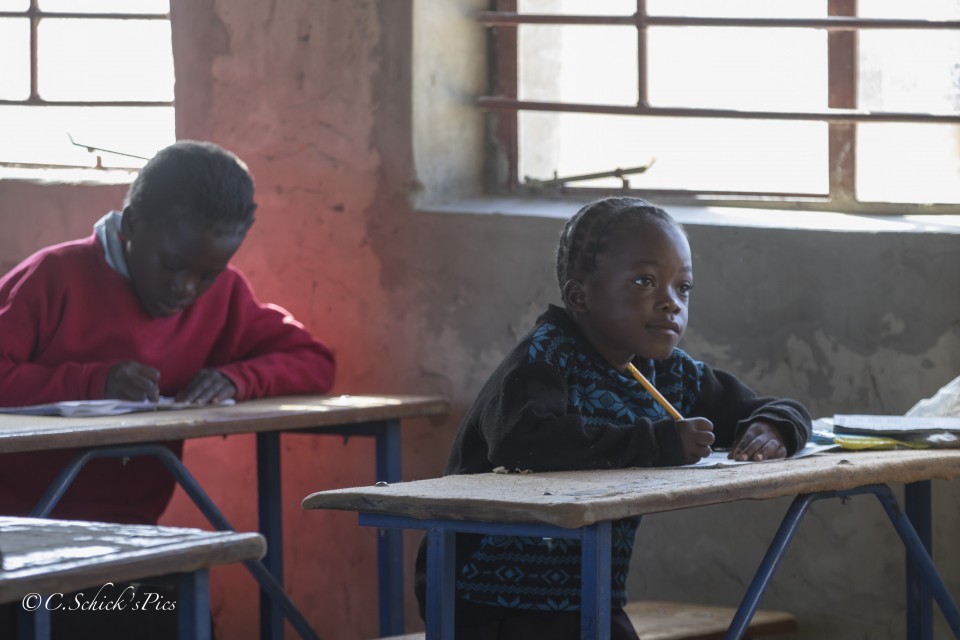 One of Fizwell’s students watches attentively as he writes questions on the chalkboard in a rural school about 30 minutes outside Chibombo in Zambia, on June 9, 2016. —
(Crystal Schick/Independent Photojournalist) 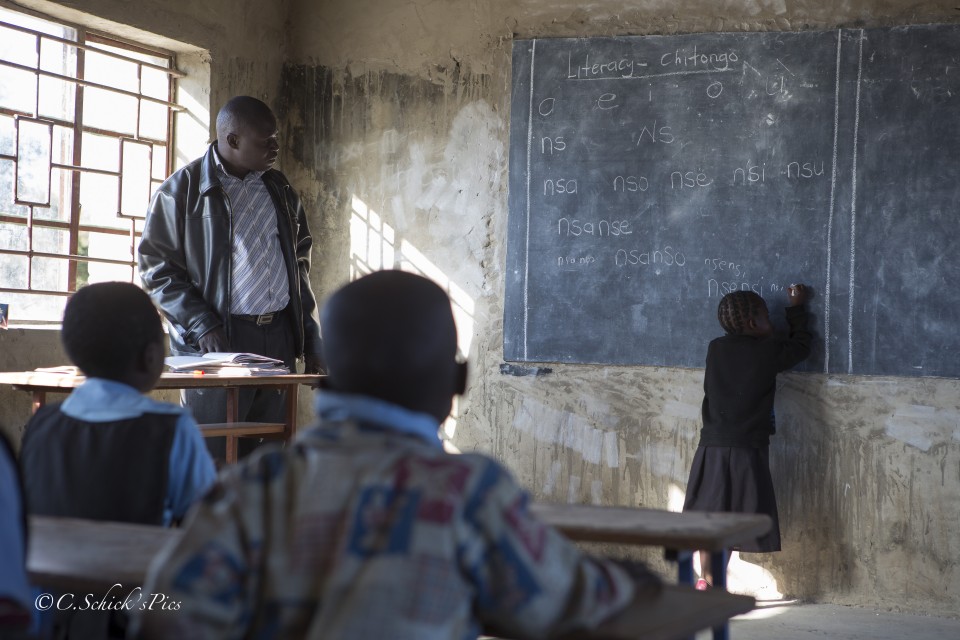 Fizwell watches as on of his students answers a question on the chalkboard in a rural school about 30 minutes outside Chibombo in Zambia, on June 9, 2016. —
(Crystal Schick/Independent Photojournalist) 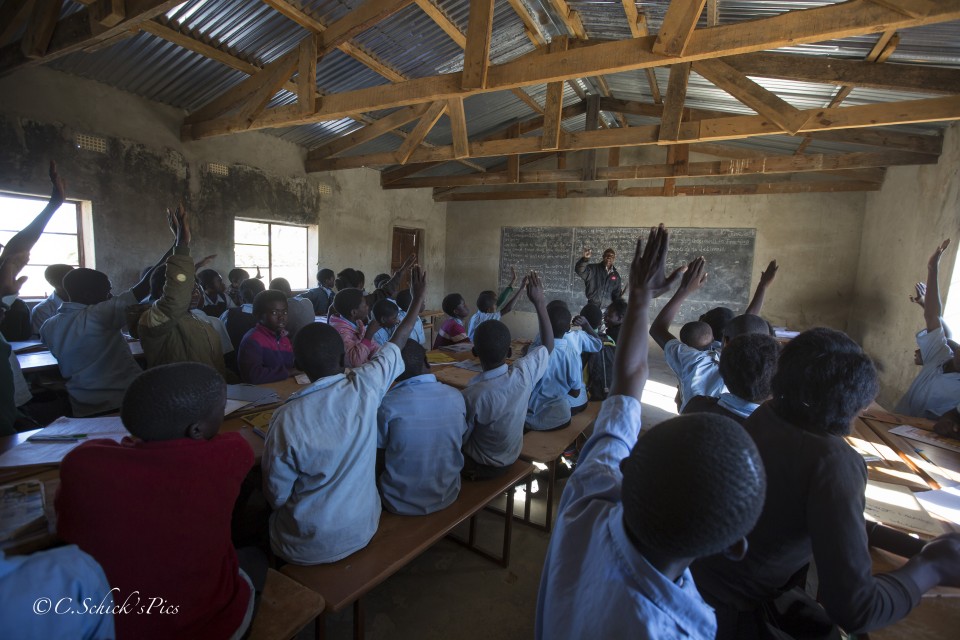 Frank Bwalya, one of Fizwell’s coleagues, teaches math on the chalkboard to seventh grade students in a rural school about 30 minutes outside Chibombo in Zambia, on June 9, 2016. —
(Crystal Schick/Independent Photojournalist)

I headed back to the house to set up to do a video interview. Fizwell knocked off around 11:30, we had lunch and then started the little interview. He was a bit nervous, so we did a redo of the questions.

While waiting for my ride, I played around with the children a bit, then Fizwell popped into to the house to ask if I like honey. Of course I like honey I said, then he disappeared, only to return about ten minutes later with two bowls. In Canada, when we have a bee problem, we exterminate. When the Zambians have a bee problem, they consider it a blessing. Fresh free honey anytime! 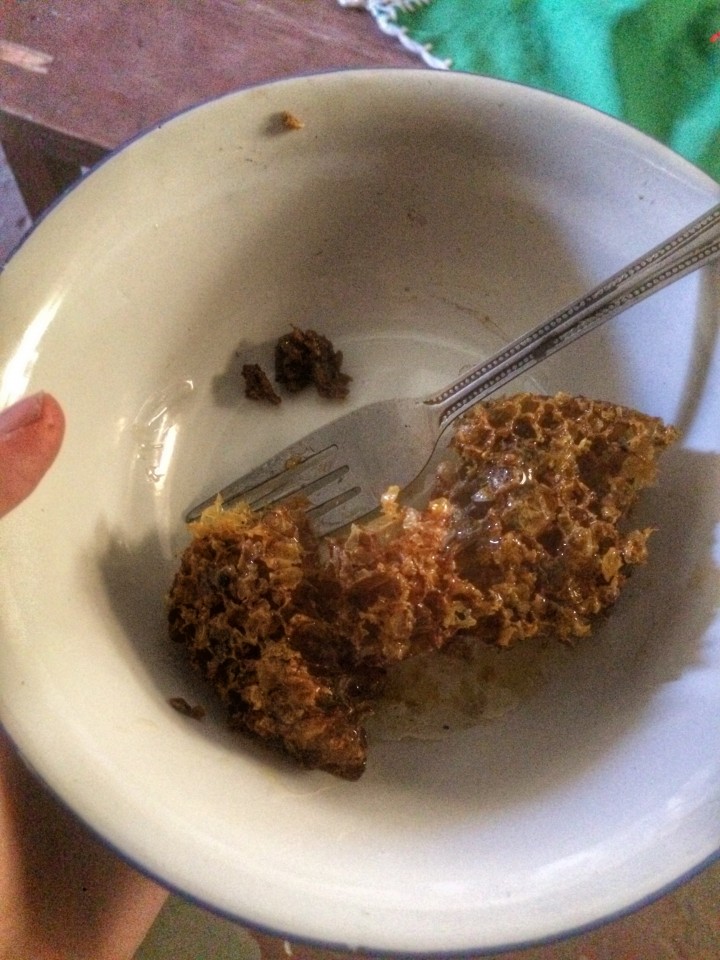 Honey they Fizwell got straight from the bee hive at the Mudima farm about 30 minutes outside Chibombo in Zambia, on June 9, 2016. —
(Crystal Schick/Independent Photojournalist)

After honey, I was taken a few hundred yards from the house, to what looked like a field of dead things and weeds. Turns out, some of them were weeds, but mostly they were ground nuts. Not only did I have the opportunity to dig up ground nuts for my first time ever, but I got to taste fresh out of the ground unroasted, undried nuts, and let me tell you, so so so good! They kind of reminded me of peas out of the pod but the taste is hard to explain as they are not quite what we are accustomed to as peanuts.

Digging for ground nuts, or as they’re called in the western world, peanuts, about 30 minutes outside Chibombo in Zambia, on June 9, 2016. —
(Crystal Schick/Independent Photojournalist) 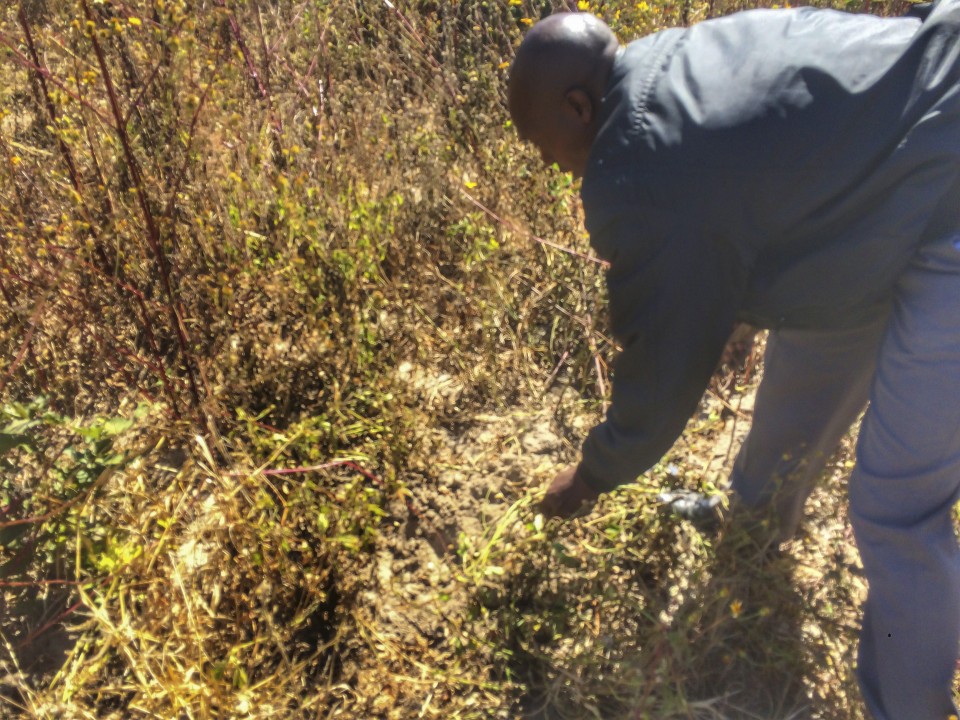 Digging for ground nuts, or as they’re called in the western world, peanuts, about 30 minutes outside Chibombo in Zambia, on June 9, 2016. —
(Crystal Schick/Independent Photojournalist)

Once we were all through, my ride arrived. All that work of finding a taxi to bring me out to the farm to avoid the dirt bike, and my ride back was a dirt bike!

It turns out that the dirt bike was far quicker and better on the atroscious dirt roads. So much so, that I actually was almost dozing off on the back of the bike!

Getting comfortable with my ride heading back to town, starting about 30 minutes outside Chibombo in Zambia, on June 9, 2016. —
(Crystal Schick/Independent Photojournalist)

After about 30 minutes of driving, we turned onto a paved road and Jonathan pulled over at one the random bus shoulders all around Zambia. We weren’t in Chibombo yet, and his English wasn’t so good so I didn’t understand when he told me were we were. But he explained that I would have to take a “minbus” the rest of the way. Within minutes, one of the thousands of minbuses that (illegally?) operate pulled onto the shoulder. I tossed my bags in the front seat, somehow squeezed myself in and we were off to Lusaska! Or so I thought. After a very short drive the minbus pulled over and everyone started piling out, like clowns out of a tiny car. I was told I had to take yet another minbus to get to Lusaka. Welcome to travelling in Zambia.

It’s actually not so bad since you are almost never stuck anywhere because there is so much public transport, as long as there is daylight.

I eventually did make it to Lusaka, then finally back to my hotel after playing hide and seek at the bus stop with Patrick, my taxi driver.

By this time, the sky had turned a burning pink once again. Another day of work, another day of bus, bus, bus. But I totally love it all!