My first assignment with the NGO, Rent To Own, was to document John Mwanza, a vegetable farmer who had used the company to obtain a diesel water pump. After a hot, smelly, six-hour ride on an oversold, transport bus from Lusaska to a small city called Petauke. I took a cab about another 30-minutes into the countryside, along uneven, dirt paths no wider than the car itself, before finally arriving around 2pm at the Mwanza’s homestead. 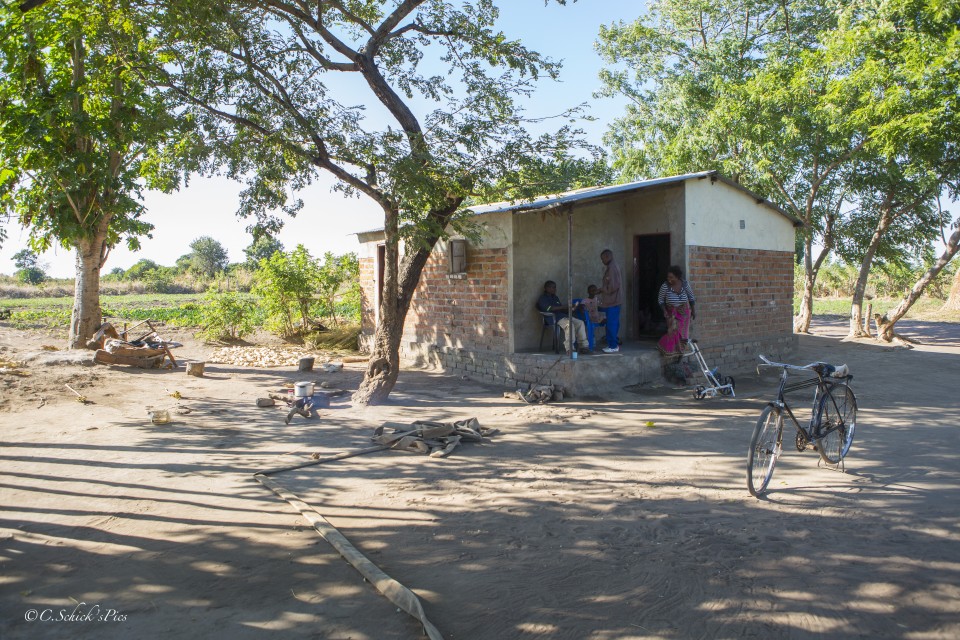 Photo by Crystal Schick Bernadette Mwanza, wife to John Mwanza, some children and a guest sit on the front porch at the Mwanza farm homestead about 20 km outside of Petauke, Zambia.

The homestead was one lonely, red brick house, surrounded by a single row of trees. The dirt surrounding the home was swept smooth. There was a small concrete landing, with two small, broken concrete, steps leading up to it and a door. Another door on the outside of the house had no patio or steps leading up to it. It lead to what I assume was the kitchen, but I never entered and never really saw used. The roof was tin and old. On the outside of the trees surrounding the house was what looked like a fantastic garden, but was what turned out to be his crops.

After meeting John and his wife, Bernadette, and six of his seven children, John took me to see some of this crops surrounding the house. He grows what the family eats and sells the rest. Cauliflower is his newest trial crop, but there were also onions, sweet potatoes, carrots, eggplant and many others. 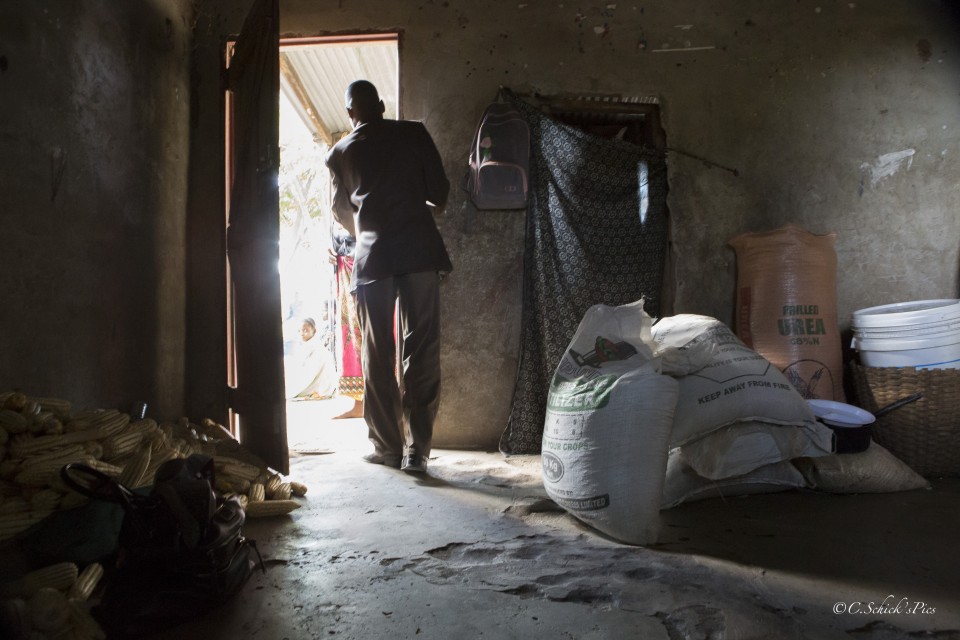 Photo by Crystal Schick
John Mwanza looks out the main door of his house to his wife and one of his seven children, on a farm about 20 km outside Petauke, Zambia. The door on the right, covered by a bed sheet and obstructed by white bags, is where all the children sleep together. The room is about 10 feet by 15 feet. Corn is seen on the left, and fertilizer bags on the right, as this room is both a family room and a storage room.

At about 4pm, John, whose English was fantastic by the way, and Bernadette, whose English wasn’t, decided to take me to the new corn storage facility that was being built just past a village we had driven through to get to the homestead. It was about a 30 minutes walk. John has a car but the battery is currently toast. In the area though, most people are by foot or by bicycle.

We made it to the village quite quickly, despite John and Bernadette stopping to say hello to everyone we met along the little path and introduce me as the photographer from Canada. Once in the village I became an obvious interest and was introduced to what seemed like everyone! People seemed as curious about the blond white girl as they were about the cameras. I took a lot of funny, posed pictures of random men who just simply wanted to have their photographs taken.

We did make it to the construction site eventually. The storage facility will help John and other farmers reduce corn waste, because right now they store their corn harvests mostly outdoors, but if the corn gets wet by rain, it can get ruined. The community hand water pump was also located next to the construction, and was my first time seeing this.

The journey back through the town was much the same as the first. John and Bernadette stopped at “store” to by the kids some freezy treats and some talk time. (Talk time is what they call minutes for cell phones here).

Photo by Crystal Schick
Bernadette Mwanza, wife to the farmer John Mwanza, stops at a local store on her walk back to the homestead to cook dinner for the family, about 20 km outside Petauke, Zambia.

As we headed back down the path towards the homestead, the sun began to lower. It was getting close to sunset, 6pm. I watched as the sky turned a beautiful African orange, with shimmers of pink and purple reflecting off the clouds above it. I took one quick snap but there were so many trees and bush around us, a nice sunset photo eluded me.

Once back at the homestead, Bernadette got the fire going and started dinner. She cooks every meal outdoors over an open fire on the ground, since they do not have electricity. She sits on a little stump or pot, and surrounds herself with cooking utensils, pots, water and food. The children help by chopping vegetables and bringing dishes. That night she conjured up a delicious dish of rice with onions and tomatoes from the garden. It was truly quite delicious. 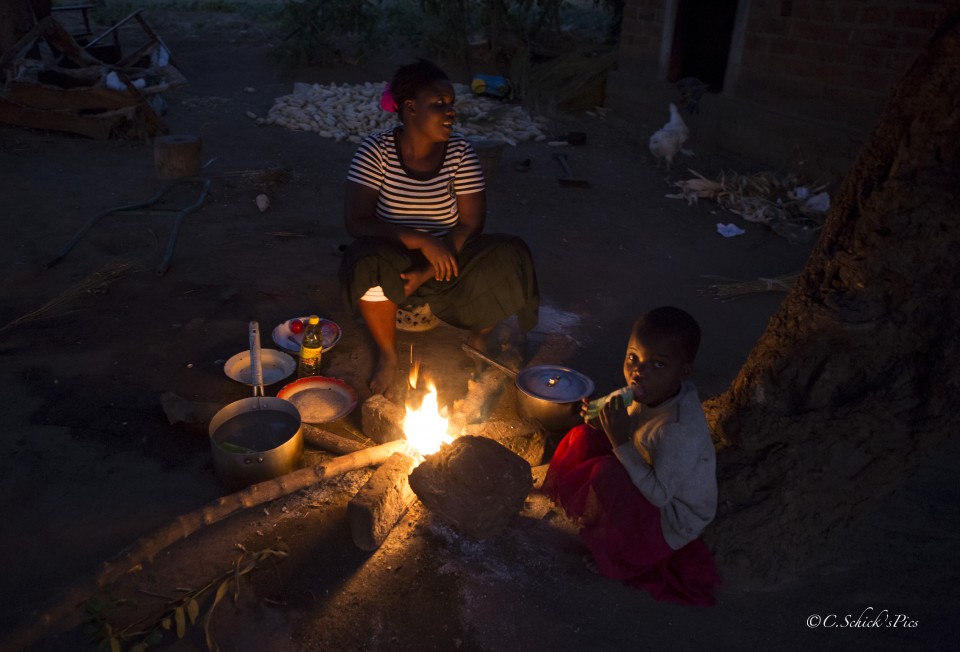 Photo by Crystal Schick
Bernadette Mwanza, wife to the farmer John Mwanza, cooks dinner over an open fire at the homestead about 20 km outside Petauke, Zambia.

We ate in the room I was to sleep in. It was the first room you enter when you walk through the door off the landing. John and I and all the children were hanging out in there before dinner, since by this time, about 7pm, it was pitch dark out and they had one battery power light in there.

When Bernadette served the food, suddenly the children all left the little circle we had formed and sat in the corner together and mauwed down, leaving John, Bernadette and myself with an awkward and slightly uncomfortable about of space for ourselves to eat. I was told afterward that it is typical for the children to not eat in the same room or space as the adults or guests, so this made much more sense after the fact. 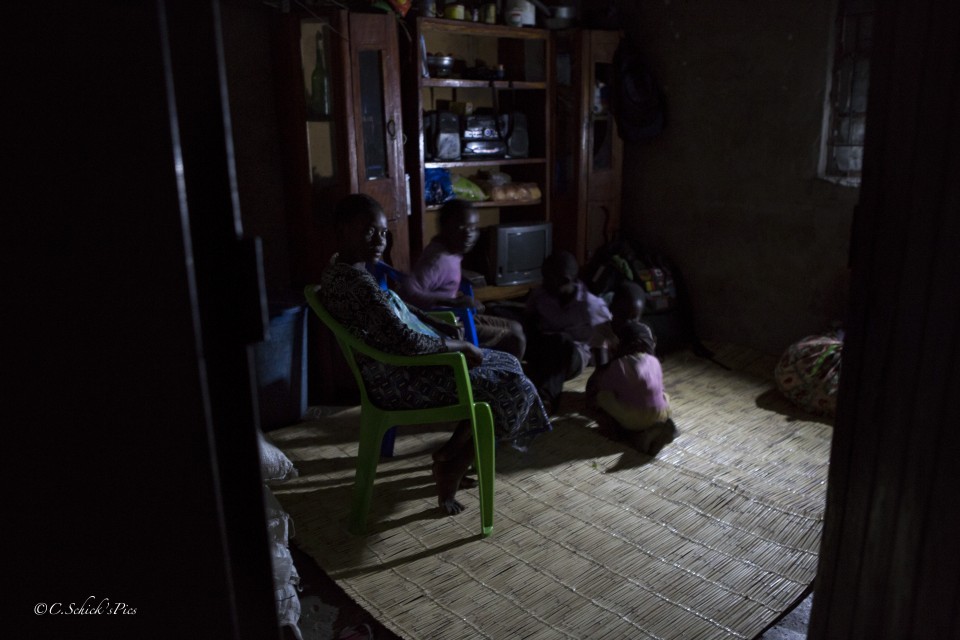 Photo by Crystal Schick
Some of the children of John Mwanza sit in the main room of the homestead about 20 km outside Petauke, Zambia, while dinner is prepared by their mother outside in the pitch dark. The family does not have electricity and must use their one battery power light after it gets dark at 6pm. 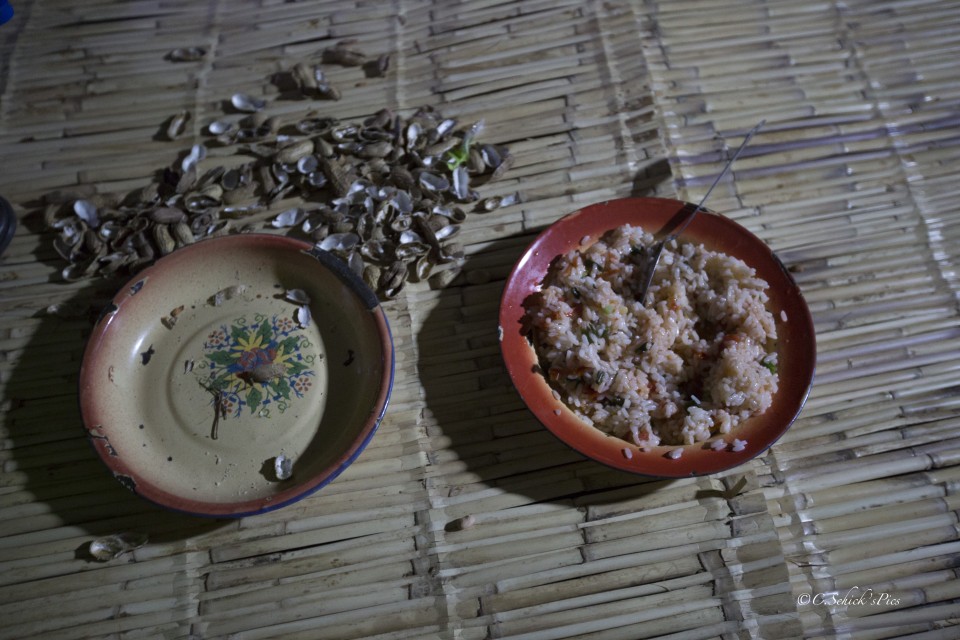 Photo by Crystal Schick Dinner at the Mwanza homestead about 20 km outside Petauke, Zambia. The meal consisted of rice with crop grown tomatoes and green onion, and also sausage for the adults.

The family normally goes to bed around 7pm and rises at 6 am, so I had already kept them late. Bernadette was walking me for one last evening outhouse visit, when I looked up and saw the most beautiful glowing night sky I had even seen in my life. Once back in the house, I saw they had pulled a mattress out into the dinner area and tented it with a mosquito net for me. But I had to apologize because I absolutely had to go photograph the night sky. John asked if I wanted company, but I said no, I liked the peace and quiet. He agreed.

I sat outside the house, only about 20 yards away, photographing the most stars I had ever seen in my entire life. And not only that, the Milky Way was putting on a show that I will likely never see, let alone photograph, again. I only spent about 15 minutes outside photographing. Normally I would try to move areas and get different foregrounds, but there was a lot of rustling in bushes around me and I’m a bit of a chicken shit. So once I got a couple snaps I knew I was happy with I went back inside. 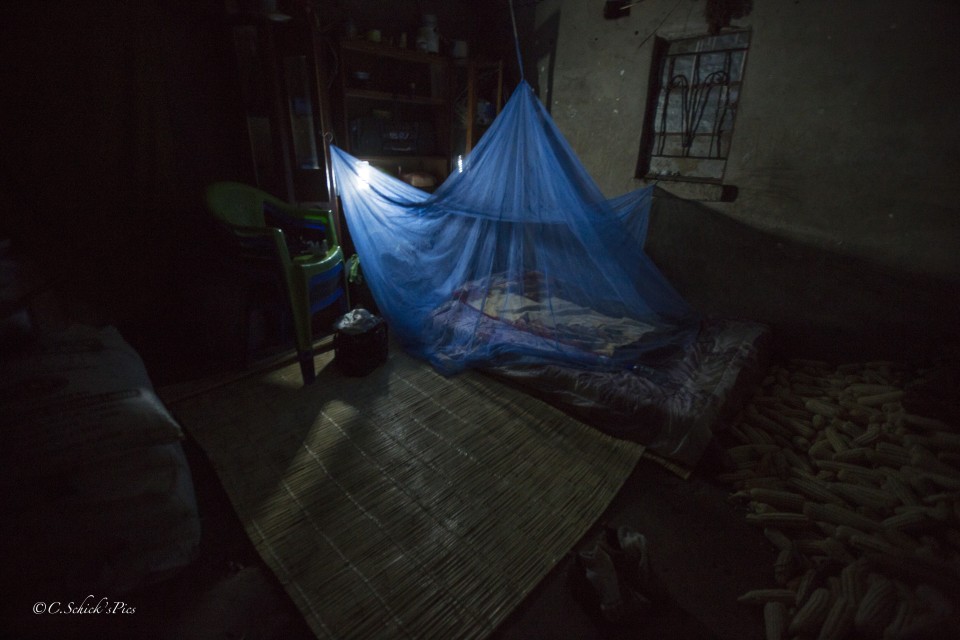 Photo by Crystal Schick
The bed that Bernadette, wife to John Mwanza, put together for me at the homestead about 20 km outside Petauke, Zambia. Once again the main living area is used, this time as my bedroom. If you look carefully, you can see corn on the floor on the right and the bags of fertilizer on the left.

I crawled under my mosquito net feeling more than satisfied with the day. John and Bernadette were in one room next to me, merely feet away. I could here them murmuring. All six children slept in one room, also off the room I was in. They were chattering like children at bedtime do. But slowly all the chatter quieted and was replaced by the sounds of crickets and reptiles and birds I’d never heard before. I turned off the battery-powered light and let the chirps, croaks, squeaks and squawks, lullaby me to sleep.